Striving for promotion and development of Industries in Industrial region of Maharashtra.

One of the main objectives of DCCIA is to promote greater cooperation between member industries & to bring them on a common platform. The intention is to address not only the concerns already present in the Industrial area, but also to involve the region’s numerous smaller enterprises and suppliers. This calls for regular interaction between the members and a strong network amongst them which is facilitated by the Chamber.

Most active Chamber of Commerce in the state of Maharashtra

Though comparatively a young Chamber, DCCIA is regarded as one of the most active Chamber of Commerce in the State of Maharashtra. Giving personalised attention to the problems of every member Industry is the hallmark of DCCIA. The Chamber strongly believes that by creating an eco system wherein every member holds each other’s hand, enormous strength is generated for every one.

Our Purpose
Our Pillars

DCCIA believes in not only representing the interest of member Industries but also of every stake holder which is part of the Eco System.

DCCIA strives for fostering a congenial working atmosphere for promotion and development of Industries in the entire Industrial region.

We firmly believe in harnessing our efforts towards building an enabling and dynamic infrastructure. Capable of evolving with changing times and requirements.

DCCIA believes in recognizing and appreciating the eminent individuals/organisations who have left indelible marks on the sand of time not only to motivate them but also to present role models to society.

We believe in providing excellent services to not only to member units but also in the improvement of surrounding locality as well as for the enhancement of every stake holders who is part of the eco system. The membership of the Chamber includes large multinational industries at one end to the young entrepreneurs starting a SSI unit in the region at the other end.

“DCCIA” is formed on seven basic pillars namely Quality, Cost, Safety, Development, Morale, Wisdom & Innovation. These pillars enshrine principles based on Universal tenets that have helped man and nature to live in harmony. These pillars are the fundamental life forces with timeless validity. 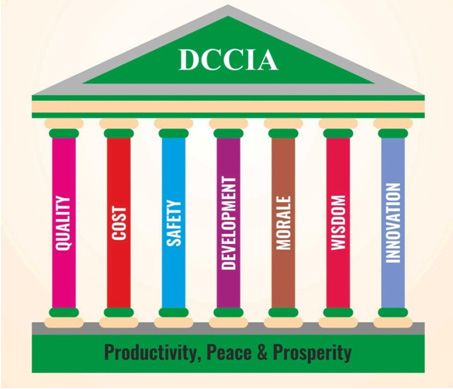 Quality is essence to win and sustain Customer’s loyalty - be it any service or any product.

Giving the most profit or advantage in the exchange of the amount that is spent by a Customer for product or service - is the foundation of success for any Organisation.

The state of being safe, freedom from the occurrence or risk of injury, danger or loss – is extremely important not only at work place but in every walk of like.

Development creates growth, progress & positive change. We believe that development should result in improvement of quality of life for all stake holders of business without damaging the resources of the environment.

Also known as Esprit de Corps - it is the capacity of a group of people to pull together persistently and consistently in pursuit of common purpose.

Wisdom in business management goes beyond meeting goals. Wise leaders have certain leadership skills that transcend the everyday requirements of an operation, including their approach to decision-making.

The role of innovation for growth is strengthened by advances in new technologies, and a greater focus on knowledge creation and use ... Much of the rise in living standards is due to innovation — this has been the case since the Industrial Revolution.

Here are some of the benefits our Members enjoy!

We strive towards providing a congenial environment through an enabling and dynamic infrastructure. This has helped many industries nurture growth. While we would love to leave no stone unturned, here are some of the benefits we have been offering to our Members.

Membership brings credibility to your business.
Regular Updates From Foreign Chamber Of Commerce
Provide opportunities for Business Networking
You can also grow your business by advertising with the chamber
Advisory Services in various fields relating to setting up and operation of Units
It helps in increasing your visibility in the business community.
You create positive perception among your customers and associates when you're identified as a member of a reputed chamber of commerce such as ours.
Help and assistance in International Business Promotion assist in getting Foreign Trade Inquires & provide opportunities for interaction with overseas business delegations.
Training/Development Programs for employees of members as well conducting various Seminar/ discussions for better understanding of Government policies in various fields relating to business.
Provide Chamber’s Training Hall, Conference Rooms and VIP Lounge to members at a subsidized cost for conducting meetings and interviews.
Provide help in developing Inter Industry relations through events such as DCCIA Corporate Cricket League, HR Meet, CEO Dinner etc
Provide assistance in diverse fields such as HR, EHS, Foreign Trade, GST, Customs, IT & Education for related issues through sub Committees of Chamber. Also, take up grievances and suggestions of members in the field of GST and Customs as the Chamber is the member of “GST Grievance Council – Pune Zone” & ‘Permanent Trade Facilitation Committee – Customs” and “Regional Advisory Committee of Chief Commissioner GST- Pune

Some of the important milestones through our journey

Launched Nagar Road Industries Association : a common platform for the industries located on Pune-Nagar Road, to address the problem faced by them.

To augment further growth, the association converted into “Nagar Road Industries Chamber of Commerce and Agriculture” (NRICCA), a body corporate, registered under the Companies Act 1956

Subsequently, to open membership to industries Located in different parts of Pune and Maharashtra, the chamber was renamed as “Deccan Chamber Of Commerce Industries and Agriculture Pune”

Striving to strengthen our foundation, create and maintain a sustainable environment for conducting business in and around Pune

In the year 1994, on the 6th of June, a group of industrialists, owning units on Pune-Nagar road, assembled over high tea at Milton Plastics ltd, at the invitation of its Director, Mr. Yogesh Vaghani and Mr. V.L Malu of Hitech Plast Containers India Ltd. The idea was to form a common platform for the industries located on Pune-Nagar Road, to address the problem faced by them. The response was overwhelming with 45 out if 55 invitees responding to idea. This was foundation day for “Nagar Road Industries Association”. An ad HOC committee was formed under the chairmanship of Mr.Yogesh Vaghani, the other member being Mr.Surinder Aggarwal, Mr Omprakash Agarwal, Cdr A.V. Ghole (Retd), Mr. Sanjay Ajmera and Mr.V.L.Malu. A small get together over high tea thus transformed into Deccan Chamber Of Commerce Industries and Agriculture Association.

There was no looking back for Nagar Road Industries Association, ‘NRIA’, as it was then known. The membership grew from 10 to 200+ within 24 year. Initially, the membership was restricted to industries located at Sanaswadi, Shikrapur and Koregaon Bhima on Pune Nagar Road. Later the member was extended to Shirur, Ranjangaon MIDC, Chakan Industries, Pimpari Chinchwad, and Talegaon Industries Area. Many large Industries located in the newly formed MIDC at Ranjangaon quickly became members.

In order to truly reflect the work being done under the umbrella of Nagar Road Industries Association (NRIA) and to augment further growth, the association converted into “Nagar Road Industries Chamber of Commerce and Agriculture” (NRICCA), a body corporate, registered under the Companies Act 1956 in August 2004. Subsequently, to open membership to industries Located in different parts of Pune and Maharashtra, the chamber was renamed as “Deccan Chamber Of Commerce Industries and Agriculture Pune” (DCCIA Pune for Short) and operating as such w.e.f. 1.April .2009

The executive committee has an innovative and professional approach. All members of the DCCIA Pune deem it a privileged for their organisations to be regarded as one of the most active individual Chambers in Maharashtra .The chamber is well represented at the regional Advisory committee, Regional Advisory Committee Chief Commissioner of GST & Customs, Grievance Aedrenal Committee Pune Zone, Permanent Trade Facilitation committee Customs-Pune and at Udyog Mitra, Govt of Maharashtra, where it has been making meaningful contribution to further the cause of Member Industries.

All issues big or small, directly or indirectly concerning our members have been taken up by the Chamber effectively and redressed. To achieve this, the managing committee is ably assisted by its Sub Committees working independently in its areas of Central Excise, Human Relations, and Industrial Relations, Environment, Health and safety ( EHS ) ,corporate social responsibility ( CSR ) ,Education, etc. Burning issues such as Toll, Gram Panchayat taxes, Legal Matters Mathadi Issues, GST and Custom Matters and local self-government issues are all taken up. The Chamber also has the honour of being recognised as authority for issuing Certificate of Origin and recommending issuance of foreign travel visa for business. It has excellent rapport with both Urban and Rural Police.

To become a member of DCCIA please click on the link below.

Apply for a Membership
Close
Search

Hit enter to search or ESC to close